Indigo Blu is a newish discovery for me, via my friend Brenda Gascoigne (thank you Brenda! ;) )  and I'm really hooked!

I want so many of their stamps but just cannot afford just at the mo with my 'Visit' to London two weeks ago - (cost us a flippin' fortune - I can tell you! But it's not often you're asked to Buckingham Palace Garden Party - it would be rude to refuse! ;) )  I'm hoping for some nice pennies for my birthday in October (can I really wait that long....? :O) so I can add to the two sets of stamps, the one  texture plate and the three pots of gilding flakes and glue I do already have.

I spent the entire week (well what little time I did have after the grandbabby sitting and other 'duties') making colourful backgrounds and using my new Indigo Blu stamps.

Here are a few 'bits'  I made - the one with the gilding I just could NOT get to photograph. Whatever light gave the flakes 'life' also made the piccy too 'white' - either that or it was too dark!

The first was a birthday card for Ali Reeve who had a 'threshold' birthday this week. 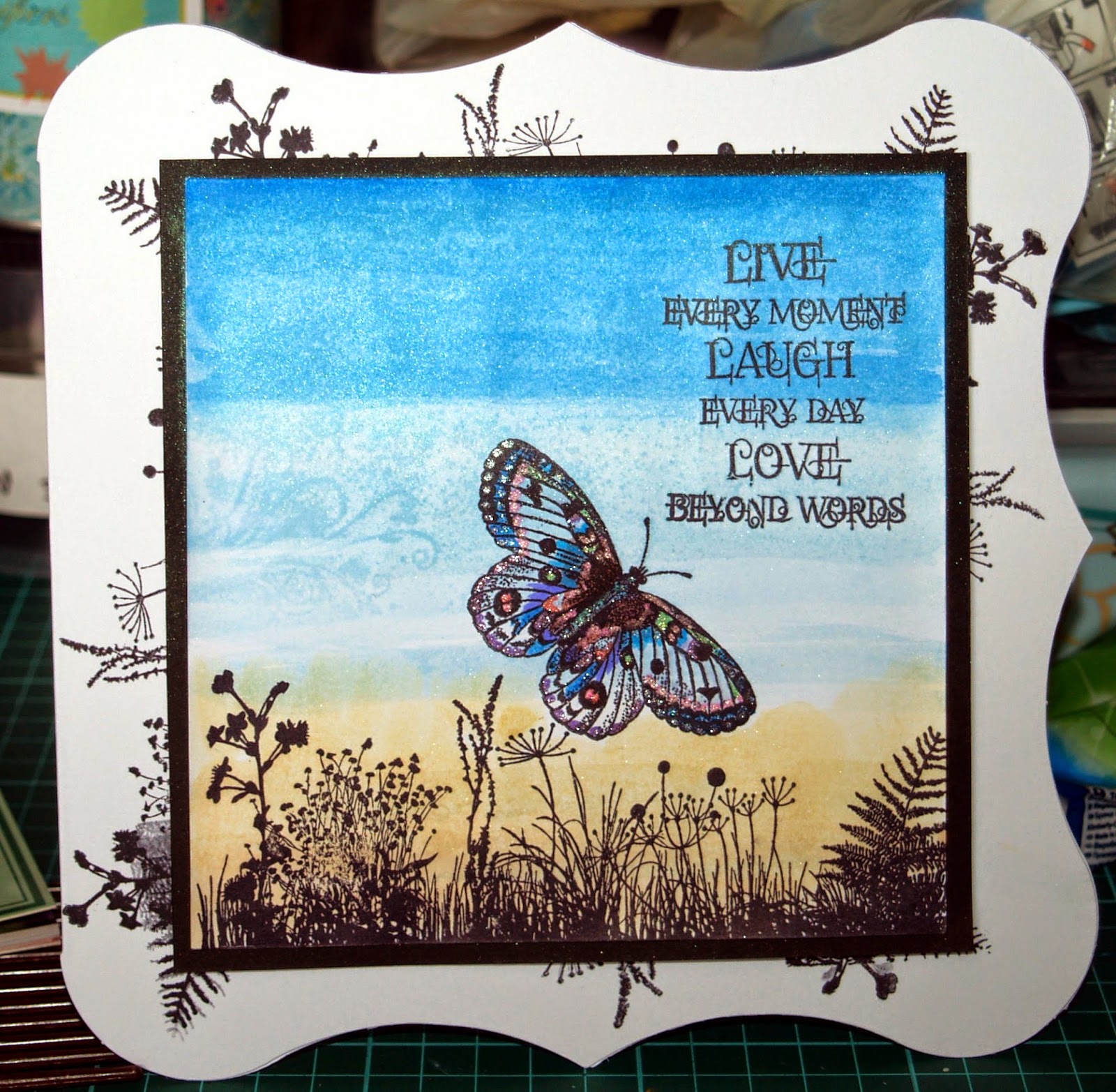 The background is colourwashed with watercolour inks after a light stamping of Versamark with the 'hair' of my Indigo Blu 'Juliet' stamp.  All of the stamped images are from the same Indigo Blu set and I coloured the butterfly with my Sakura Tiara pens. I then mounted that onto black card.
I stamped the white base-card with the 'Wild Meadow' border in a square with black Archival inkpad.


My second, is a birthday card for my second son Michael, who is a great globe-trotter and for whom the message could not have been more appropriate - he certainly does take life by the 'wotsits' and lives it! lol!  He won't be home for his birthday - off to Germany!

I used Indigo Blu's Grand Tour III set for this one.  The balloon, one of the message stamps and the 'treeline' stamp. I also 'ghost-stamped' the treeline stamp but it's not showing well on the photograph.

The background is another one I made myself and once again, Archival inkpad in Jet Black.  Simply mounted on black card and a muss of red and black cord to finish is enough for my 'simple' son!  He would NOT like a pile of flowers and charms at all! 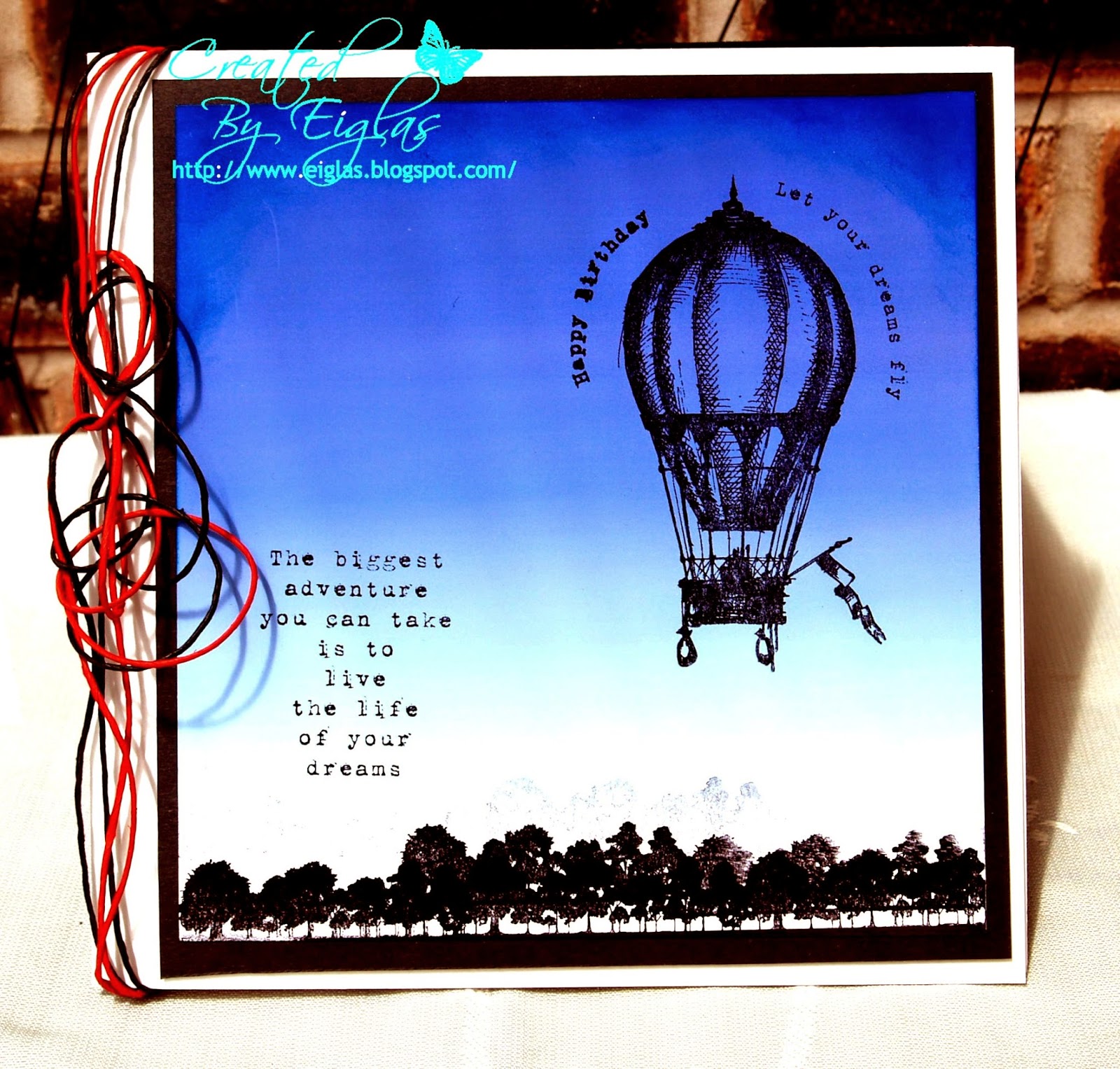 Number three is another 'background' card - this time it's a combination of inkpads smoozed onto a spritzed worksheet and then the paper smooshed over it and coloured ink spritzes. This time, in addition to the butterfly and Wild Meadow border, I've added dragonflies 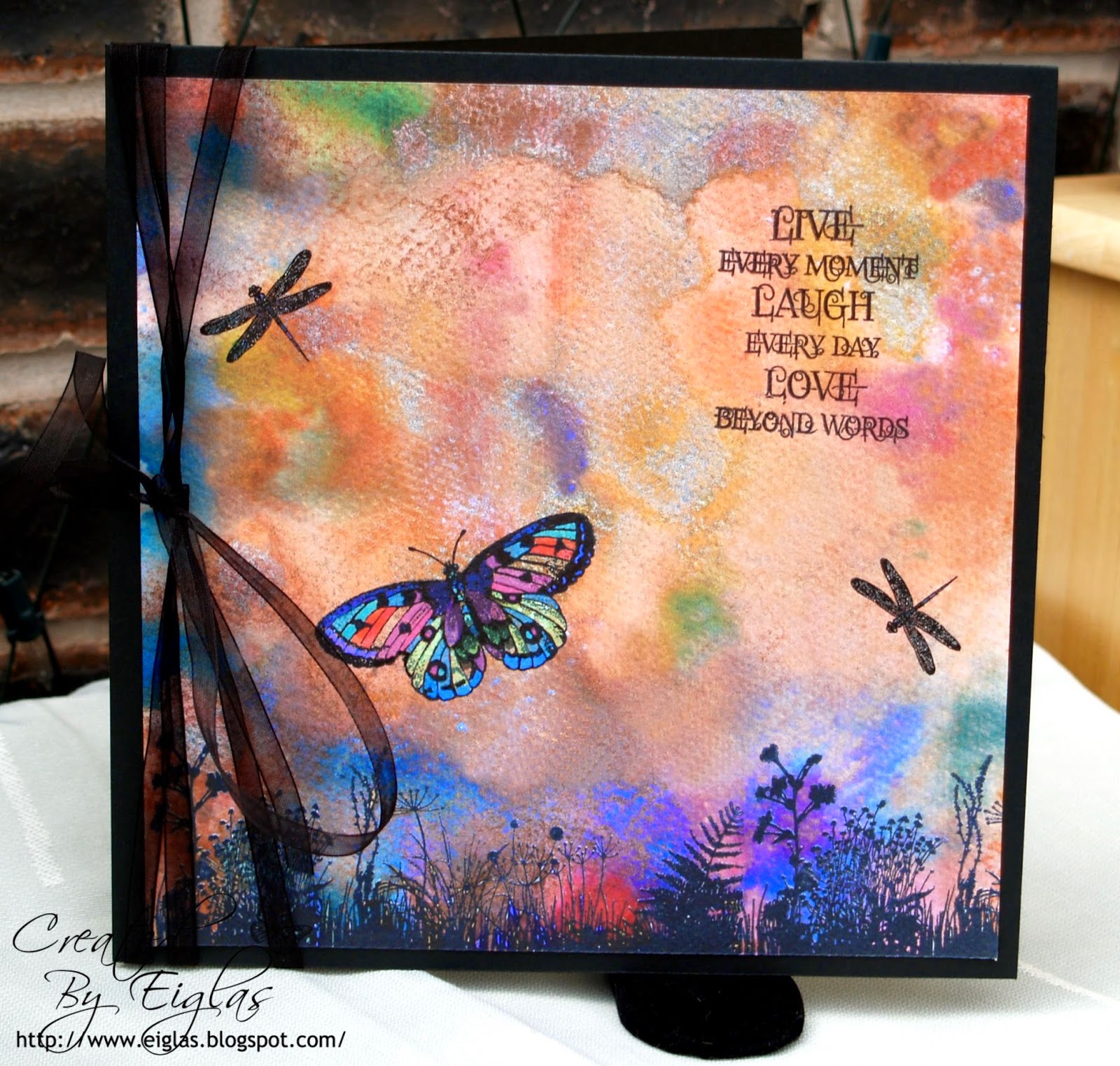 I don't think you'll be able to make it out on here, but the dragonflies do have little coloured wings.  The butterfly was coloured with watercolours this time as the background was quite strong to cover.

My fourth one was the most difficult, for me. I was wanting to show how versatile  only two sets of stamps can be - I LOVE this stamp but was getting a bit tired of black by now....! lol!  And 'Juliet' DOES look so beautiful and dramatic in black.....

So I went for ivory and sepia.  It's a kind of easel card of my own devising - I'll put it into tutorial form when I get a minute - but for the minute, I stamped onto cream card with TH Distress Embossing Inkpad and Distress Embossing Powder in Antique Linen, rubbing off the crystals as required.

I then inked over the whole with Distress Inkpads in Antique Linen, Vintage Photo, Brushed Corduroy and Walnut Stain in patches, starting with the lightest and going dark, popping a mesh 'stencil' (a bit of plastic basket from a Feta Cheese tub!) on around the image for the 'top' layer. 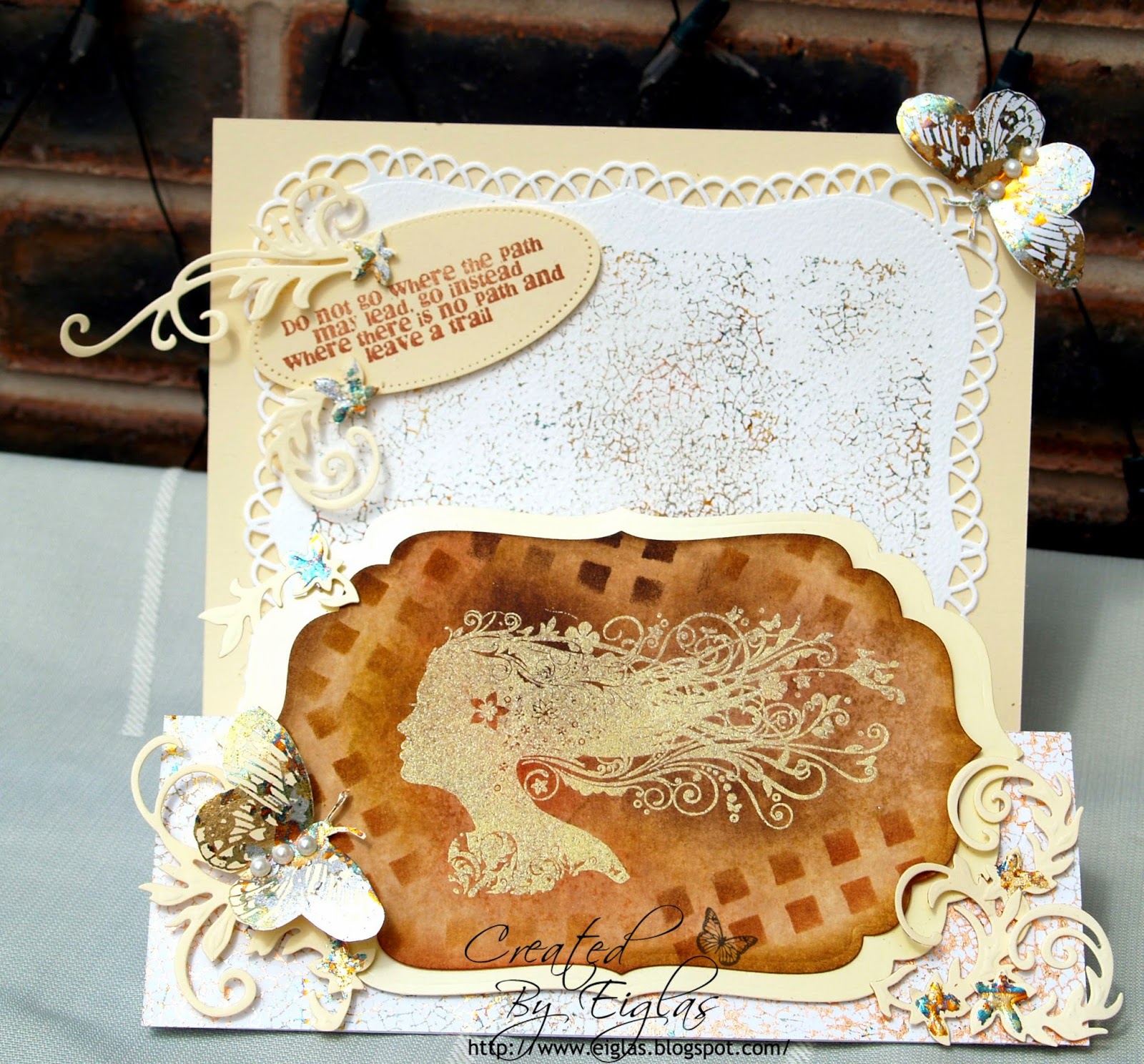 This I then die-cut with a Spellbinders Nestie - Labels Four.
I then mounted that on another larger Nestie cut from cream
'coated' glossy card (Astrolux)

I wanted to use my Indigo Blu gilding flakes and my Indigo Blu 'Crackleglaze' texture stamp, so I die-cut the background card with a fancy Labels One and stamped with my IB Flitter Glue .

I used a small piece of Cut & Dry sponge to do this - soaked it with the Flitter-Glu (making sure it goes well into the sponge - you don't want any on the surface of it or it will give a 'cloggy' image) and used this like an inkpad.

I then sprinkled the gilding flakes (Royal Peacock) over the stamping and let it 'grab' and dry a bit ( the glue stays moist on the pad for a few hours if you then place it face-down on a tile or a plastic lid).
Once it was dry - I gave it a thorough rubbing off with IB 'Scoochy Foam' to remove excess and buff up the gilding.

Next were the little flourishes - sorry, I've forgotten what they are called but they're Spellies too. Once cut, I used the Flitter Glu and a paper stump to  add more gilding flakes to the flowers on the flourishes, to 'catch' the gilding on the back-sheet.

The butterfly from the Wild Meadow set was used again to gild and decoupage and the message stamp was die-cut with another Spellie.


If I thought the fourth one was difficult to envisualize and make in a bit of a hurry, then the final fifth one was easy peasy to make but a nightmare to photograph! LOL!

'Juliet' made another appearance, and I am so sad this didn't photograph well as it's stunning in 'the flesh'.

As you can see, there are a few mats going on here - mostly black and stacked with a couple of metallic ones for contrast.

Unusually, the black one with the image on, is at the bottom of the pile - this is inset matting, not the usual way of building up from the bottom in the centre.

Juliet was stamped in Flitter Glu and gilded (Royal Peacock again! I have others but I just LOVE this one.) onto a rectangular black card. I then took a larger piece of metallic peacock blue and used a 'Go Create' Frilly Frame #7 to take a mat out of the middle to make a 'frame' for the image.

The next layer was the same die-set but a larger size in black.

On top of this came a copper-bronze metallic card in a Nestie - Labels 23.
Then black again in a larger die from the same set.
Glue it all together.

The feathers are Spellies Shapeabilities Peacock Feathers which I cut from pearlescent card and painted with mica powders, securing with a jewelled brad. 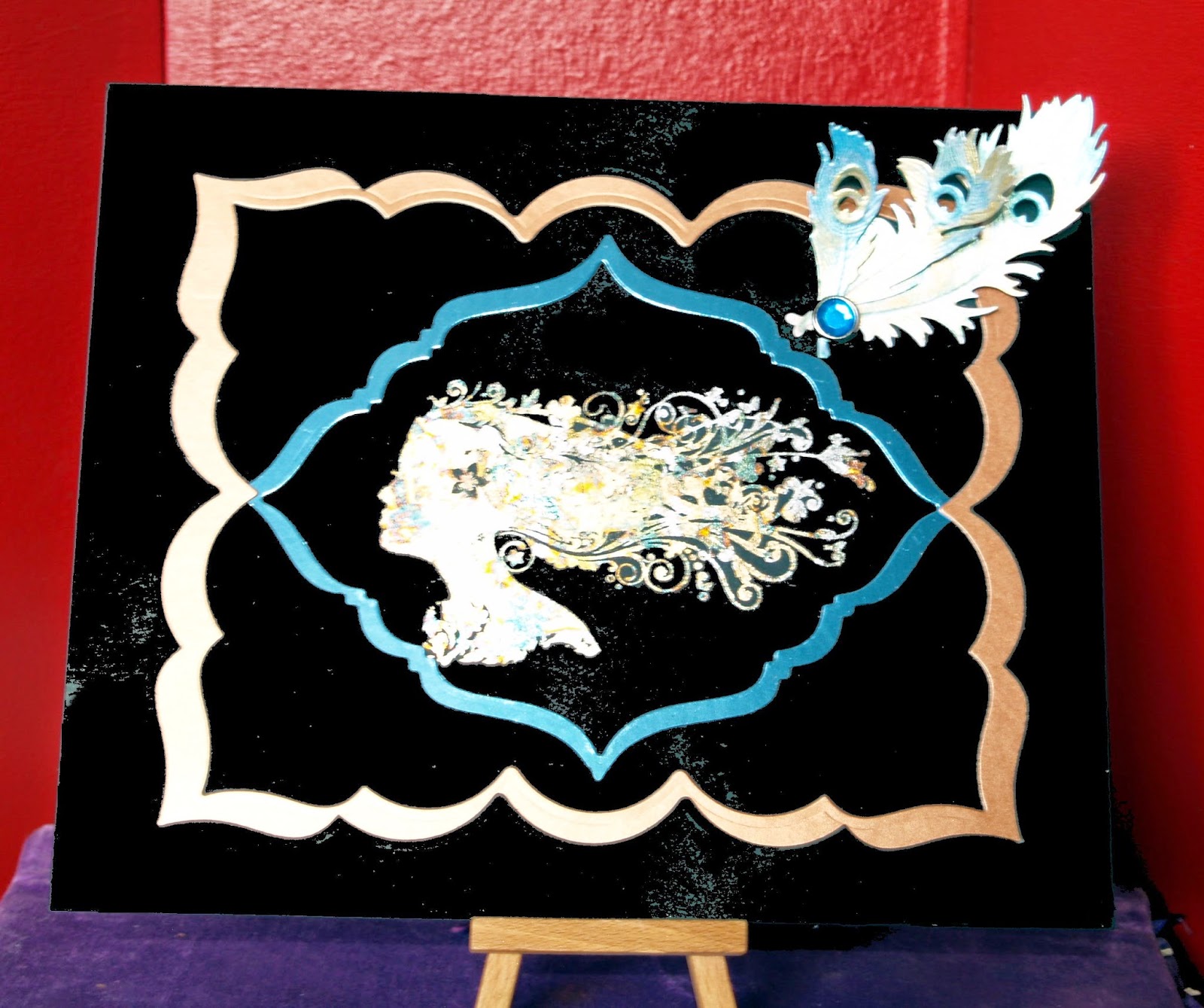 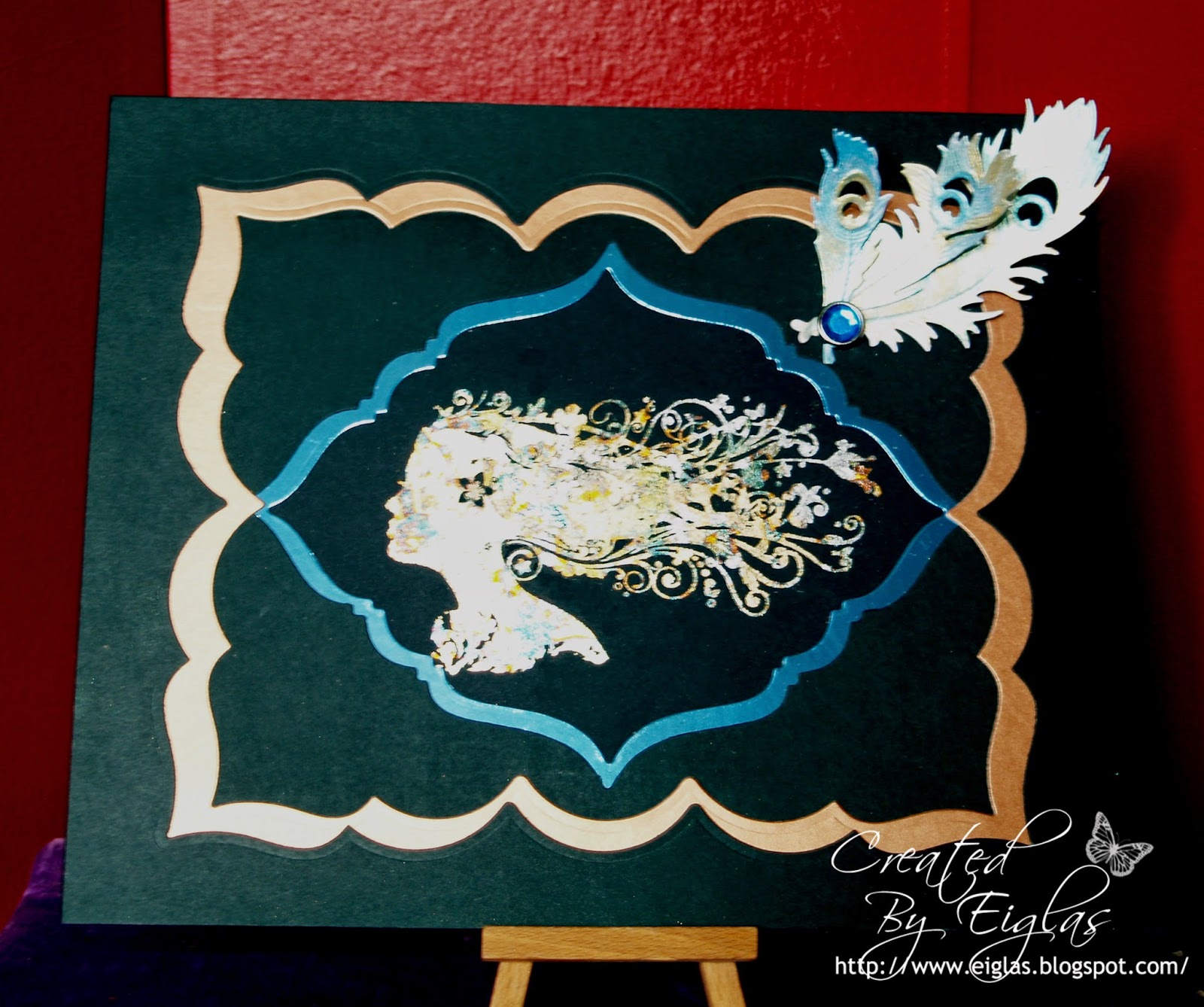 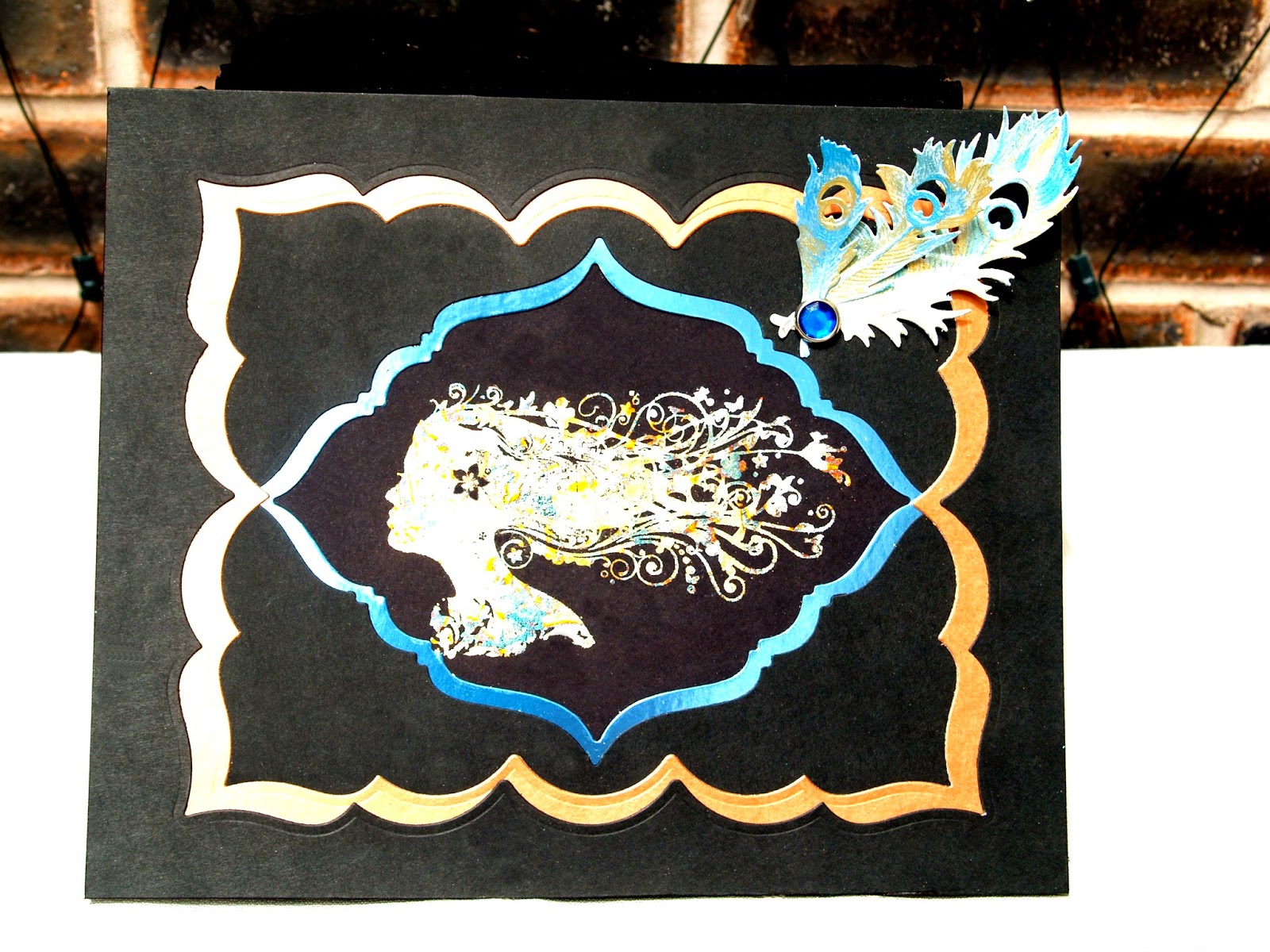 Then came the hard work! Trying to photograph the little varmint! ;)

You decide which is the best photo - for me, none of them work properly.

I loved using these products and I'll let you into a little secret - Juliet and the Wildmeadow images were a so-called 'freebie' from a magazine. I don't like magazines myself - nothing in them except a pile of advertizing usually  I only buy the odd 'gift' and get the mag free!

As soon as I saw what make the stamps were I went and hunted it down.

What I have noiticed, is that lot of people don't seem to know HOW to use acrylic stamps (as opposed to the vastly superior Photopolymer stamps).

Acrylic stamps, unlike either rubber or photopolymer stamps, are MOULDED.
A plastic mixture is poured into moulds. That is why they often have the odd fault in them. Most, if not ALL 'freebie' stamp sets are acrylic.I have had a few with 'dings' and hairline 'scratches' where the compound wasn't sitting properly in the mould. Still usable, usually - we're crafters - we can fudge around the odd imperfection, can't we...? ;) !

What is a totally different issue, and is similar with photopolymer stamps too (I know - I used to make them! ;) ) is the fact that they don't 'like' water-based inkpads too much!

Water/plastic? It runs or pools, doesn't it?

That is why you need to 'prime' some clear stamps with a solvent-based inkpad like Staz-On for the first inking. The solvent 'loosens' up the top layer of the stamp, giving a 'key' for the water-based or dye inkpad.

That procedure would probably negate half of the stamping problems peeps have with these 'freebie' stamps.

There isn't usually a problem with pigment ink - that sticks better to the clear stamps.

I hope that helps some more peeps - it has on my Facebook groups.