Yayy! I seem to be back up and running, in the main, now! Still adding programs and had no end of conflict probs with my peripherals and the new Windows 7, but the answer is to go to the product main site and get a new driver download - they're usually free. Clearly, the conflicts have been anticipated!

This week on C.R.A.F.T, we have a fab tutorial from our own Julie on how to paper-piece.


I've never tried this technique before and Julie's tutorial made it really easy to understand and do.

I've used a fab little cat image from our own Claire too - a real team effort this week ! Have a look on her blog - her Doodles are so good and would make any project stylish and professional-looking.
Claire is our sponsor this week and you have the opportunity of winning not one but three of her wonderful images from her blogshop Shophandmade'! 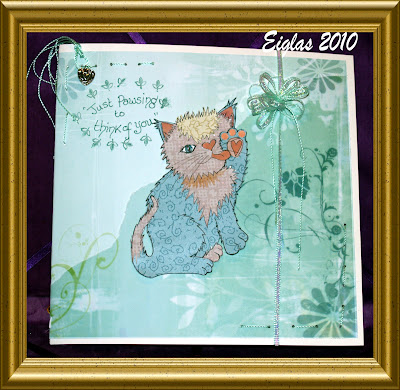 I'm afraid all the papers used are from stash but I do know the green main body of the cat is a Paper Pizzazz design from years and years ago! I've been looking for another of the same book for years but can't find one.

Over at C.R.A.F.T this week, the theme is 'RED' and anything created in that colour is acceptable so here's my effort.
We have lovely prizes from Donna's Den this week so do come over to play!


It's my lovely number one son Matthew's equally lovely girlfriend Jenny's Birthday this week and I made it with her in mind. 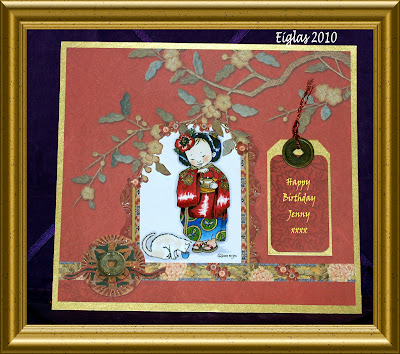 The little Geisha image is from the wonderful Mo Manning and I've coloured it with my Copics.
The main cardstock is from Crafty-Bits (design CTC009) and the paper ribbons are left over from a C&C kit. 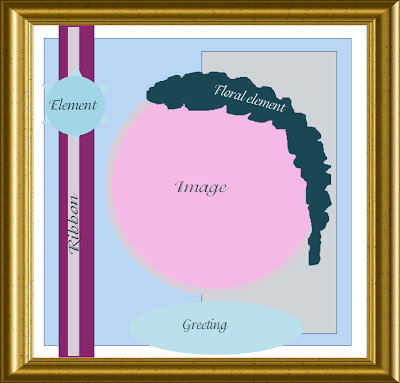 At C.R.A.F.T this week, we're offering a sketch for you to follow.
The colours and theme are your own choice, so why not marry it up with Copics Colour Challenge 47, Colour Create or Colour Throwdown 75? 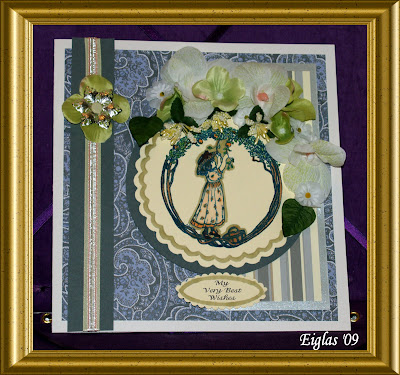 For my demo card I've used a rubber stamp I've had for years but never used and I'm really sorry now because it has come out far better than I'd imagined.
Having just ripped my craft-room apart looking for it in vain, I can't, at the moment, tell you the make or name of it....! Typical...!
I can tell you though, that the flowers were a bargain!
The large ones were in bunches from Wilkinsons costing about 89p per stem with about ten or twelve multi-layered flowers on each stem.
The little daisy type flowers are from a cheap little room-scenter set. There was a little porcelain flower which you're meant to soak with the perfume and I suppose you're supposed to put that in a bowl and surround it with the little daisies but needless to say, crafter that I am, that didn't happen!
The little cream 'bunches' are from the pound shop and you get a good few in a packet.
The only dear bloom is the one Prima on the left hand ribbon with the brad through it!
I'll get back with the details when I get another minute and supposing I find the darn stamp! LOL!
Enjoy and let us see what you've done on C.R.A.F.T!
at January 10, 2010 6 comments:

This week's project over at C.R.A.F.T is Resist Techniques, so I've created a little tutorial so you can have a go at this fun technique too! 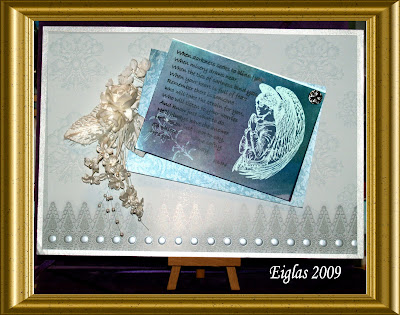 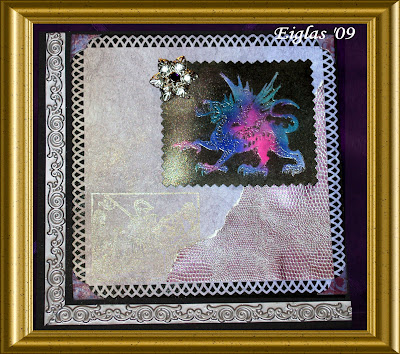 For this week’s C.R.A.F.T Challenge we’re presenting a tutorial as

we are aware that not everyone knows what a ‘Resist Technique is!

There are a couple of different versions and they enjoy various
names so I’m going to name them what I know them by, although
you may know them by another name.

The first one I’ll call Joseph’s Coat. The reason will become apparent! 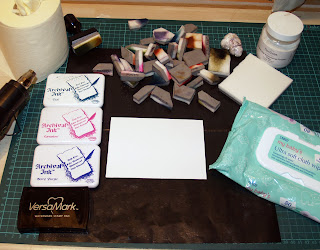 Method
Using either the brayer or the blending pads, cover the cardstock
with patches of colour in linear (brayer) or random (pads) pattern. 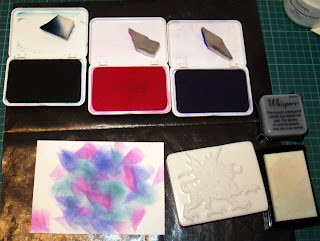 Ink up stamp with clear ink and stamp your image.
Use the clear embossing powder and heat gun to clear emboss the
image. 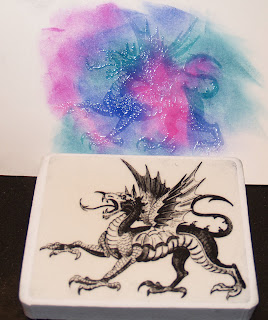 Wait for the image to cool, then apply black ink to the whole surface
of the ink using either the brayer or the pads—your own preference. 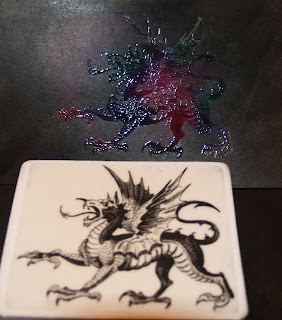 Wipe over the embossed image and the bright colours will shine
through ! 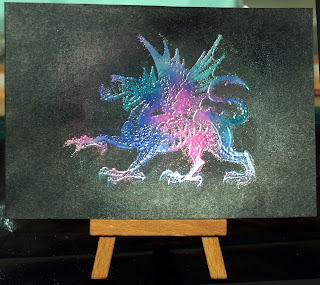 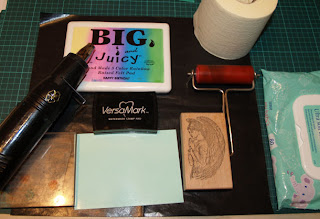 This method differs to the first in a couple of ways.
Using your clear embossing inkpad, stamp your image.
‘Set’ the ink using your hear gun.

Then, using either your brayer or your pads, cover the whole of
the card with your lightest colour
Using cloth or kitchen roll wipe over the stamped image and the
original card colour will remain. 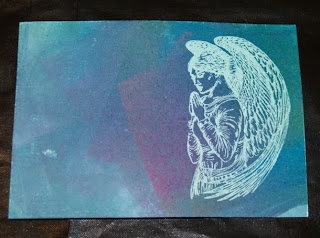 Repeat step one with your next stamp.
Repeat step two with the next lightest ink.
Polish with cloth again.

Repeat these steps as often as required for your design to build
up
You can even overstamp with a strong colour at the end, if you’d
like, using your design like a backing paper 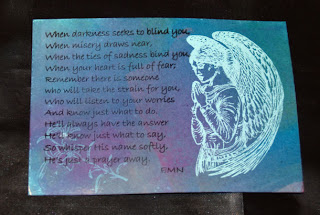 I hope you enjoy this tutorial. I'll try to put more on soon!
Hugs,
Ei
x

At last, after twenty-nine days, this dreadful, horrible, tenacious bug seems to be on its way out!
The night before last I managed my first night in my bed since Christmas Eve and yesterday I felt well enough to actually go to the shops, which is just as well as my cupboard was in a similar shape to Mrs. Hubbard's! I even managed to attend my induction at the gym for my 'Lifestyles' prescription, which I have been waiting for since September. I really didn't want to have to wait another four and a half months! I am so chuffed, you can't imagine!
I've had baby Ada for the first time since Christmas today too and, bless the little angel, she was not a scrap of trouble, but then she never is. She is a tonic in herself, but I couldn't take a chance of infecting her.
All is not quite rosy though as I've had a bit of trouble with other aspects of my health as well, but I'm trying to sort those too.

Hope this is the way up! 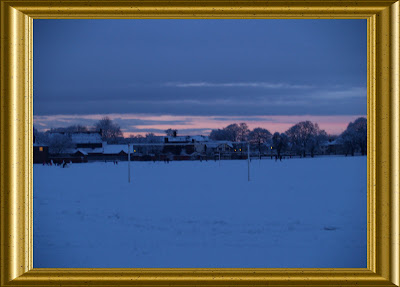 Still ill.....
Oh! I am so fed up of this. I can't breathe properly and if I start coughing, I can't stop. My ribs are sore and my head aches from the coughing.
The good news is the snow is about four inches thick! Never been known in this area for years! It's too warm as Liverpool is right on the Gulf Stream and we only ever get a light frosting. The last 'proper' snow I remember was about ten years ago and we took Merlin out in it and he loved it.
It has snowed since - Izzy disappeared in it and we had to carry her home! That was April 2006 I think. It disappeared fast though. 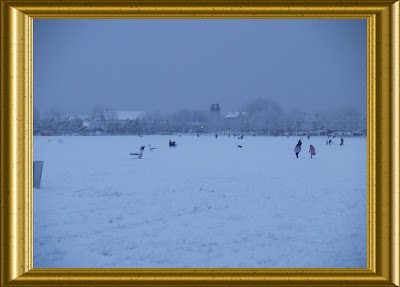 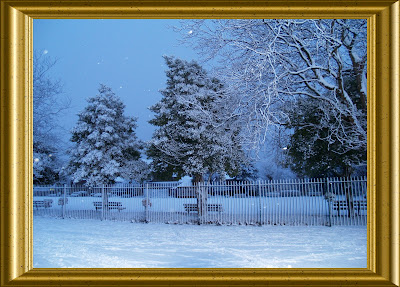 Mr Eiglas and I haven't been out of the house for days but the snow had the desired effect. We didn't go far - only to the park down the road - but it was lovely! The air was so fresh and crisp it was a joy to breathe it.
The best part of our little foray though, was the sight of entire families - Dads too - building snowmen and having snowball fights. It was just so.....normal!
In a society where we're force-fed troubling images and the media seem to revel in presenting us with the bleakest outlook for our species, watching those little families just enjoying each other's company in the snow, was a joy.
We don't live in a posh village or a rural hamlet, we live in Liverpool, a city that, in general, gets a press on a par with estate-agents so you'd expect I'd have seen some of these 'asbo' behaviours so endemic in our papers but you'd be wrong.
Granted, I don't 'do' town - never much liked the press of cities - but we live close to two thriving shopping areas, one even has the local title 'village', and we still manage to lead a very peaceful existence!
I wonder if we're letting the media 'blow up' our social problems somewhat?
I'm not saying there is no anti-social activity - I know there is and I feel for the innocent people stuck in the middle of it - I just wonder about the scale.
Oh wow! How did I get here? I guess it's the temperature talking!
Hope you're all well and not in any trouble because of the snow.
Going to make a cuppa now.......
Hugs,
Ei
x
at January 06, 2010 2 comments:

Thank you for all your best wishes - it's so kind of you.
I still feel grotty and like a limp chip but I can't just do nothing where there was so much craft so I'm going to try to run an alternative blog called 'Eidle Tales' whereupon I will test the true measure of your 'blog buddy-ship' and expose you to my scribblings, if you are at all willing!
No hard feelings at all if you don't fancy it!

My short Stories & odes can be used and abused in any way you like - most of them have been written a long time ago, so are well copyrighted - as long as 'Eidle Tales' gets a small credit.
I'll be only too chuffed if you like them enough to want to use them!

Many of the verses are very suitable for cards and the like.
There will be some bereavement poetry too so be warned if you're a bit sensitive - I still cry when I re-read some of them.

Not sure what form this will all take other than I'll lash one on at least weekly - perhaps more depending on how the scribbling goes - and might even start a weekly serial if I can figure how to link it all together on the blog (still learning the tags thing...!LOL!).

I've never knowingly plagiarized anyone else's stuff (...although a couple of mine were nicked by a well-known magazine which is why I gave up sending them in - I'd rather give them away than have them stolen....) but we all take in by osmosis the creations of others and regurgitate pieces of them from time to time - there's very little that's 'original' any more.

(This is my fourth attempt at posting this on 'Eiglas' and it's crashed each time - hope this one sticks or I'm giving up!)

Anyway it's www.eidletales.blogspot.com
Thank you for listening so patiently and I hope you get something from my scribblings, even if it's only a case of superiority complex....... 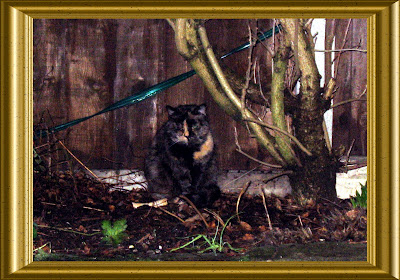 Just a lickle update and apology for any misguided souls still popping in.
Still ill and done nothing at all since before Christmas.
Baby Ada is supposed to be coming back to me on Wednesday and I'm not convinced either of us will be up to it.
Haven't slept in my bed since boxing night as I can't breathe properly lying down and we keep disturbing each other with our non-synchronised coughing!
Would normally at least have a few New Year walk piccies but not been anywhere to take any.
I think this photo of Tabitha sums us up at the moment.....
Hope to be more entertaining soon.....
hugs, (...not too close...)
Ei
x
at January 03, 2010 5 comments: