Over the past few days I've been in discussion with a talented designer from Crafts-U-Print called Carol Smith.


Carol contacted me with come very complimentary comments on my digis and asked if I would allow the use of some of them on her super card-toppers, which she sells on Crafts-U-Print.


I confess to being a little sceptical at first as, really, I could do as much myself, had I the mind to, and wouldn't need to share any (very small it must be said!)  profit but as I looked at her pages on CUP I became convinced that I should go for it.   I did discuss it with a few of my friends, hobbyists and professional, and ended up more confusticated than before!


So, in the end I took the bull by the horns and trusted my instinct that Carol is the lovely lady she appears to me to be.   I think it will possibly share my images to a wider audience and that thought makes me happy!


Here is her first creation with my image of my Very Cheeky Snowman!


Carol has, very kindly, sent me the sheet so I was able to make up one of the possible designs with it. 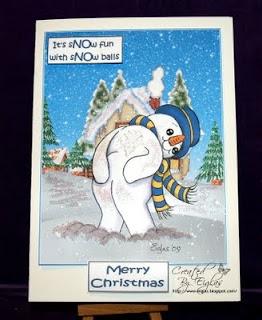 The sheets Carol makes are already coloured in and come with the background scene you see here (plus others) and they come with the separate sections so you can easily decoupage them.


Here's a low-res image so you can see the layout (but thieves can't use it as it will pixillate as soon as you enlarge it). Carol's are much higher res and are a clean print.

Carol's toppers are great fun and a real boon to those with little time to spare or not confident in their colouring and they're very inexpensive!

And don't forget, if you would like the original digistamp, only I have those and Cheeky here is over at  Eiglassing! in the Christmas collection.  Or, just e-mail me and a download code will be sent.
Pop over and have a look!