Back to the Blogging! Ada's Yellow Moon work...

Well, it's that day at last, the day my Ada started school...! I felt very confused about today. I felt apprehensive, yet confident for her because I just knew she'd fit right in - she's such an easy child.  But then I saw her photo in her school uniform.... 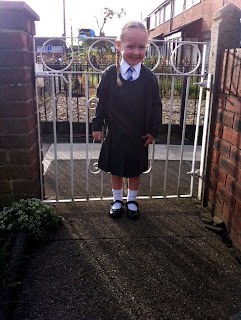 ...and I burst into tears.   No longer my baby then.... and another woman to give her all her knowledge and she'll soon realize that Nanna wasn't all that clever after all - teacher knows much more.....

But then, I remembered my own little ones as they went off on their school adventure (that's why I know she'll find me out for the fraud I am...!) - it was still me they cried for when they weren't well, it was still my name they called when they needed practical help and only I would do if they fell and hurt themselves.  I guess this will be the same.  And of course I still have...... 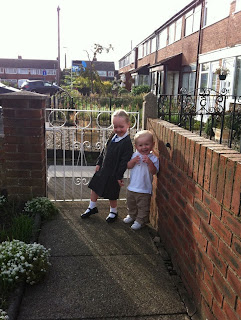 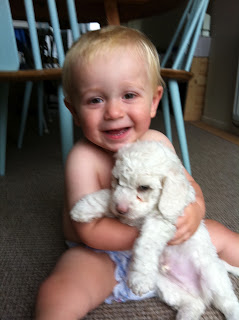 ....TOBLERONE!  My Toby is still coming to his Nanny on Mondays for the forseeable so I still have lickle hugs and kisses to look forward to.

No doubt he'll be as crafty in his way as his big sister... 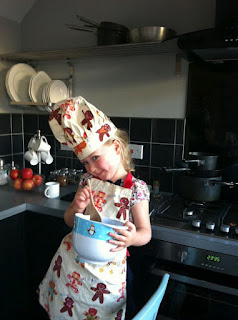 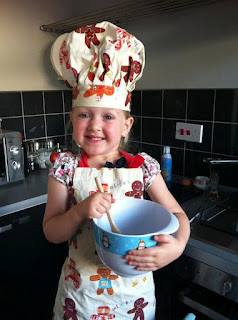 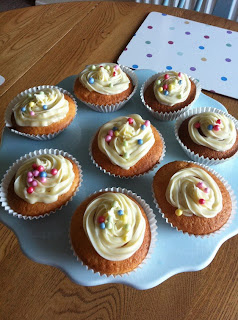 ...but probably EATING the cakes rather than making them...!

Ada is still craft mad and is now capable (...well actually she INSISTS!..) of making her cards from start to finish with no help at all except for any writing, although she signs her own name on them.

She has made some more projects for Yellow Moon with the fab Baker Ross stash they send her periodically and this time, appropriately for the Olympics, there is a sporting theme.

Here are her two Olympic cards  (she actually uses a bone-folder and scores and folds the card herself.). 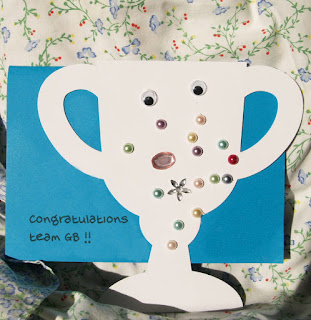 This one was inspired by the young gymnasts doing the floor displays. Ada thought they reminded her of 'scattered pearls'.  I really don't know where she gets her expressions from but she sometimes amazes even me! 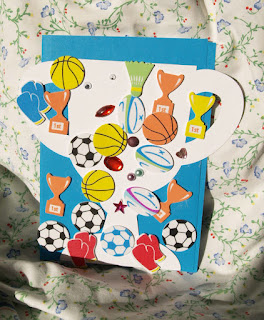 And this ones sums up her feelings of Team GB winning all the medals they did over the period of the games and the ParaOlympics too!

There are more items but I've not yet photoed them so keep popping back to see Ada's work for Yellow Moon.


Before I sign off, there's one more card she whipped up when I wasn't looking...... 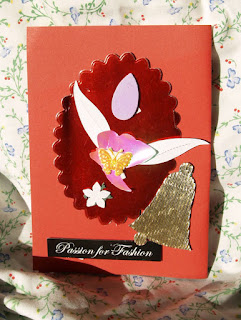 I know it's primitive, but I wouldn't have thought of using the butterflies and the leaves in that way - the balance of the composition, I think, is fab, four year old or no!

I don't know about going to school, I reckon she'll be TEACHING there before long! LOL!