It's that time of the month again!  The lasses at Southern Gals have a theme of 'Things with Wings' this week and in honour of this occasion I have launched a new collection of digis the Eiglas Faeries.


Being of a 'certain age' I have fond memories of the illustrations in 1950's 'faery-tale' books and as I have two willing and able models to myself most days, I thought it would be nice to make some 'faery' drawings with a 1950's feel.


This card is the debut of my 'Bobbikin'. He's only a baby faery and is just sitting on his toadstool trying to think up mischief.  I hope you like him although I've already had some 'eeukk's directed at his antennae so he's available 'naked' too (although the 1950's faeries did have them!)! 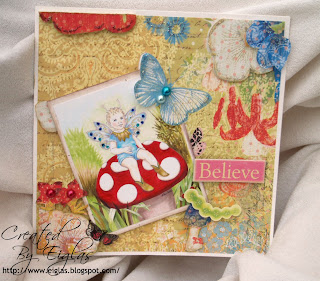 Please do pop over to Southern Gals - they're an incredibly talented  team and will inspire you to even greater pieces of art!

The model for my 'Bobbikin' was, again, my Ada although he wanted to be a boy!  He's coloured with my Copics but this particular image I printed onto glossy paper too. The bp is Kay & Co from their 'Mega-pad' grunge selection.

Hope you like him and you trip 'down under'!